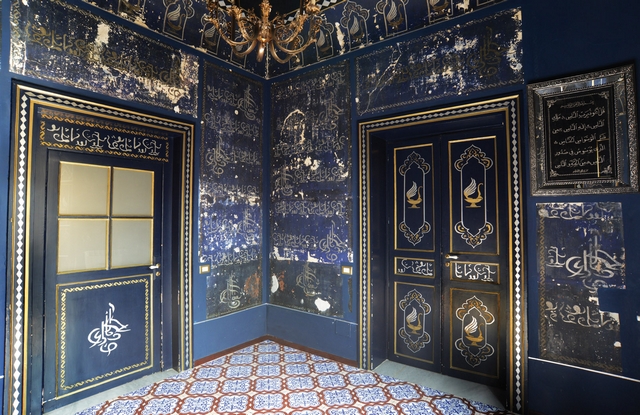 The capital of Sicily, Palermo, hides many secrets, a whole life wouldn’t be enough to uncover them all. Hidden rooms inside churches and palaces, catacombs, secret passages once used by secret societies, and underground tunnels: they’re the marks left on the city by a turbulent history made of conquers, wars and revolutions, that have seen the city passing under the dominion of several civilizations, from the Phoenician to the Greeks, then to the Romans, to the Byzantines, Arabs, Normans, Spanish and Austrians.

Among the many concealed wonders of Palermo there was one hidden in plain sight, right in the heart of the city, behind the Norman royal palace, a mystery that bring us back to the times of the Arabs, when Palermo was the capital of a Muslim emirate. They named it the Blue Room, a true chamber of secrets discovered in an apartment in Via Porta di Castro, unveiled during ordinary renovation works.

The young couple who owned the house had the plaster removed from one of the rooms, and under it spotted a blue painting; they removed more and more plaster and found out that the whole room was once painted blue. Not just that: the walls were covered in Arab symbols and writings.

To this day the Blue Room is still subject to studies, but the most accepted theory to this day comes from the studies of the University of Bonn, whose Arabists and archaeologist claim the chamber had been in the Middle Ages the secret chapel of an occultist, a mage connected to the Arab masonry.