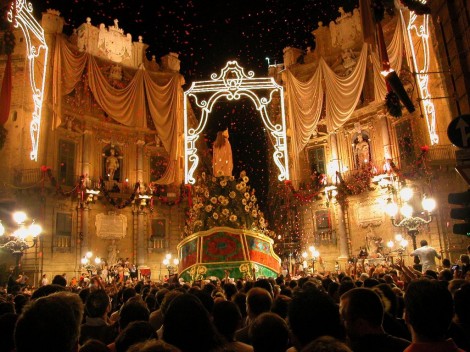 Rosalia was born in 1128. She was a young girl descendant of a noble family, named Sinibaldi, who
lived at the court of Roger II of Sicily. When Rosalia was 13-15 years old, the count Baldovino
asked her in marriage in return for saving the king’s life, but she refused him and decided to
follow the Basilian Order, living a religious life in a cave in the Quisquina forest, not far from
Bivona, a village near Agrigento. Later Rosalia moved to Palermo, hiding in Monte Pellegrino, in a
cave with abundant water, where she lived until her death.

In 1624 a plague beset Palermo. In the same year a sick woman went to Monte Pellegrino and drinked
some water dripping from the rock inside the cave. Suddenly she saw an apparition of the Virgin Mary and
Rosalia who told her that in the cave was hidden a treasure: under a sheet of marble they found
human bones smelling of flowers.

One year later a hunter, named Vincenzo Bonello, went to Monte Pellegrino to kill himself after
his wife died because of the plague. There, Saint Rosalia appeared to him, saying that the only way
to save Palermo from the plague was to bring her bones through the town. A few months later in
Palermo took place the procession on honour of Saint Rosalia, during which a miracle happened: when
her bones were carried around the town, plague ceased, people suddenly recovered and the
contamination stopped.

Today you can still visit the sanctuary of Saint Rosalia in Palermo if you are planning a trip in Sicily. You can also take a look to online catalogues of Scent of Sicily if you are looking for a suitable accommodation.